For our holiday, my family and I crossed the expanse of the Midlands to visit the Norfolk coast. We drove through The Fens, where parents lived out their childhood, and saw the house where my mother was born, the market town where my father’s family had a store and by the side of a road, the cemetry where my grandparents are buried. It has been probably twenty years since I last visited these memory spots. Locating them wasn’t difficult, my memories are locked in, but they weren’t the same. A door had moved and why did I recall an upright gravestone, when in fact it is flat in the ground? The little alterations that I had made in my mind had stuck and I corrected them, chiding myself for not recalling the finer details.

Then on to the coast and the chance to see more places I visited as a small child and from which I took the inspiration for my book, The Women of Heachley Hall. Heachley doesn’t exist, but the woods around Heacham do. There is no Little Knottisham, my fictional hamlet, but Snettisham, Dersingham and Ringstead are real. The latter being the village where my grandfather was born. We drove through it, passed the flintstone cottages. I tried to capture those round stones in the walls of Heachley Hall because I knew they were significant for the region. 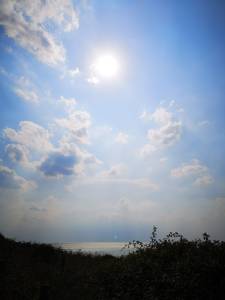 We came across a major fire – a haystack fully alight on the top of a hill. On the other side of the field, a small piece of hot black plastic had blown over and caught the dry grasses of a hedgerow. The smouldering fire quickly spread and we called the fire service, alarmed at the proximity of a row of houses. A few hours later, the field was black charcoal (according to the news reports) and the gardens of one house had suffered. How quickly devastation arrives, sweeping its way across the tinderbox of drought ridden fields. I never thought when I wrote my book and described how a house fire spread to a neighbouring wood that it would be played out miles from where I imagined my story to be set. Thankfully, the fire service saved the houses and the fire was contained.

Above Old Hunstanton cliffs, we ate ice-cream in the sweltering heat and down on the beach, paddled in the tidal pools. The cliff face in places had collapsed just below the prominent, inoperative lighthouse. I snapped photos, wanting to frame the images just as I described them in my book. The late afternoon sun loitered in the sky above the sea – an unusual feature of the east coast where the sun typically rises over the sea and sets over land. The curvature of the coastline allows the sun to track the beaches from East to West.

There, done. I felt satisfied. Mission accomplished. I might not live in Norfolk, but the connection to the county remains strong. I’m so glad I chose to set a book about memories where my memories live on.

As for my next work – I remain in East Anglia. Can’t seem to let go of the region.

The Women of Heachley Hall is now available on iBooks, Kobo, Nook and Indigo

The story is intriguing and at times had me on the edge of my seat. The book is beautifully written and the story tempts the reader with snippets of clues throughout the book. The house itself is almost a breathing entity with its own personality and I loved this about it. A cleverly written plot that drew me in and had me wandering the rooms of Heachley Hall along with Miriam. A story about love, regret and the secrets families keep. Highly recommended.  ~ Brook Cottage Books

The evolution of a book…

Five books to take on a desert island