Birthdays are family time. The giving and receiving of presents, a cake maybe, and perhaps a party.

For Rose, a birthday is a day to spend in the company of her granddaughters. She likes cake, especially chocolate cake, and always has one candle on top of it to blow out. What she also does is say something, a few words. The trouble is, they don’t make much sense to her granddaughters. They listen, and forget, or so it might appear. What do you do if your grandmother claims to know the future, hears things that will come true? Each of the three sisters has to decide what to do. What if Rose really does have a gift?

Rose puckered her lips and slowly expelled a stream of air. The diminutive flame flickered for a second then died. Through the threads of smoke that lingered above the birthday cake, Rose’s pale eyes fixed on Naomi. When she spoke, her warbling voice was stretched, but the revelatory words were enunciated clearly.

‘Beware of a man named Frederick and his offer of marriage.’ Rose blinked and gave a small satisfactory nod. ‘Cut a slice for me, love.’

Naomi glanced to her side. Rebecca was poised, holding the fake ivory handle of the cake knife with a white-knuckled grasp.

‘I don’t know anyone called Frederick,’ Naomi whispered into Rebecca’s ear. She’d no plans to marry gaming geek Kyle, or any other man for that matter, at least not until she could see the benefit outshine the exuberant cost and extensive planning needed.

Rebecca pressed the knife through the layer of marble icing. ‘She’s done it. That’s all that matters,’ she said quietly.

‘What’s that?’ Rose cocked an ear towards her granddaughters. Even if Naomi bothered to ask questions, Rose, with a humorous twinkle in her eye, would likely shrug dismissively. Sometimes she claimed it was a spirit that dropped the thought into her head, other times she implied the eruption of a whispering voice was due to the revitalising energy of her birthday. The lack of consistency significantly weakened Rose’s sage advice.

On the other side of the stained kitchen table, Leia removed the plate from Rose’s hand.

‘Here, Gran, let me help you.’ She thrust the plate at Rebecca. ‘Just slice the cake. She’s had her moment.’

Her moment, as Leia put it, was something of a tradition on Rose’s birthday. The sugary-topped sponge, which Rebecca had baked that morning, the solitary pink candle and the customary extinguishing of the flame, were a necessary precursor to the miniature party. Without fail, every year, Rose, with her salt and pepper hair swept back from her face into a bun, leaned toward the candle, and spoke her words of prophecy. The only difference this time was she had said them directly to Naomi instead of to a spot on the far wall.

If you’re intrigued, then head over to Amazon. The Last Thing She Said is now live, available on Kindle and in print. Don’t miss out on finding out a family secret. 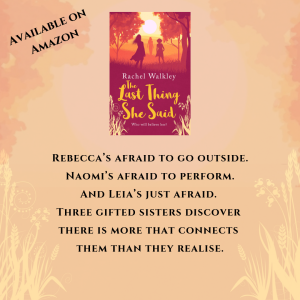 “Beware of a man named Frederick and his offer of marriage.”

Rose’s granddaughters, Rebecca, Leia and Naomi, have never taken her prophecies seriously. But now that Rose is dead, and Naomi has a new man in her life, should they take heed of this mysterious warning?

Naomi needs to master the art of performing. Rebecca rarely ventures out of her house. She’s afraid of what she might see. As for Rebecca’s twin, everyone admires Leia’s giant brain, but now the genius is on the verge of a breakdown.

Rebecca suspects Naomi’s new boyfriend is hiding something. She begs Leia, now living in the US, to investigate.

Leia’s search takes her to a remote farm in Ohio on the trail of the truth behind a tragic death.

Just who is Ethan? And what isn’t he telling Naomi?

In a story full of drama and mystery, the sisters discover there is more that connects them than they realise, and that only together can they discover exactly what’s behind Rose’s prophecy.

The Last Thing She Said

Who will believe her?

Interested? Then sign up for my reader’s club newsletter: Rachel’s Readers and you’ll receive a complementary short story.

Keeping track of the family #familysagas